To stop the bamboo grid in the Square Foot Gardening bed from warping, touching the soil, and rotting, I propped it up with some old bits of coral I had.

The downside is that they soon go grey with mould (and I don’t really want mould spores near something I’m going to eat), so I dipped them in a mild bleach solution to kill the spores, gave them a bit of a scrub, and left them to dry in the sun.

Then I painted and varnished them, and left them outside for quite a few days to allow the toxic fumes to evaporate, before putting them anywhere near my future food source.

I wanted hot pink spraypaint but it’s not available here, so I had a litre of paint mixed in the closest thing I could find to hot pink – I even took the paint chip out into the sun to check.

What I’ve ended up with isn’t even remotely close – more like fluorescent pinkish apricot – and I’m sure it glows in the dark! 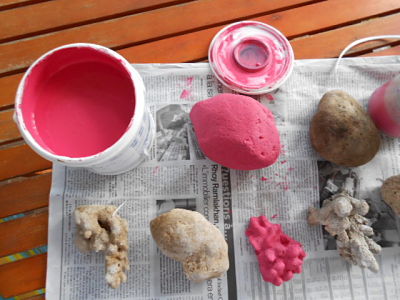 Why don’t they sell sample pots here? And why do paint chips never represent what you actually get?

I had to varnish the coral because the paint’s too flat – there’s no sheen whatsoever to it.

It looks chalky and weird.

And will stop the return of mould, though a sheen to the paint would have also have served that purpose.

I was planning on using the paint on the bamboo grid once it faded.

I obviously won’t be doing that now – it’s too ugly and too flat.

However, I suppose that at the end of the day, while it’s nothing like I wanted, and caused me extra work, it adds colour to the garden, and serves a practical purpose to boot.

What more can you ask for?

(Well, maybe some hot pink paint with a slight sheen!!!)

And don’t listen to the guy at Espace Maison who tells you that Permoglaze and Mauvillac paints are of equal quality!!!

I live in Mauritius with my husband, Alf, and am planting a tropical garden. I write about people we've met, and experiences we've had as expats.

If you didn’t find the answer you were looking for, send me your question via the Comment box and I’ll answer it best I can.