I found el cheapo plastic pots for the top of the stands, which I sanded, applied two coats of terracotta paint to, tiled and grouted, then applied a third coat to cover the grout, as it was much darker than the paint. They’re the right shape, but a bit smaller than I wanted. In Mauritius though, beggars can’t be choosers – you might end up waiting forever if you hold out for something specific. 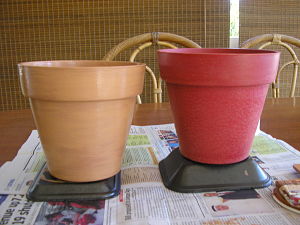 Unlike when I bought the small pots, this time, I actually measured the pot stand so I’d know what size pots to buy. 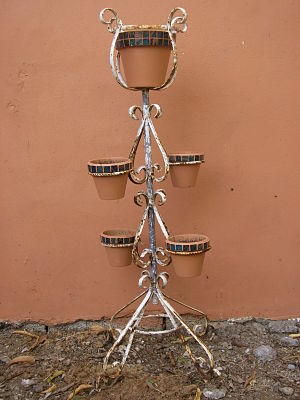 However, I made the fatal mistake of only measuring one of them:

I’m starting to develop a serious dislike for those pot stands!

I’ll be planting the pots with ivy geranium, (after drilling holes in the bases – why don’t pots have drainage holes anymore? We have a drill, but I’m sure lots of people don’t). Hopefully, the geraniums will trail down and disguise the size problem!

Anyway, on a more positive note, I love paint – instead of ugly red plastic pots, I now have two lovely “terracotta” pots.

Even if one of them doesn’t fit! Grrrrr!

Moving on…with the pot stands, I’ve still got to apply rust converter and primer, and then spray them with either white gloss or matte black – I’ve yet to decide, though I’m leaning towards black. But I’d better do it pronto – with all the rain we’ve been having, they’re getting rustier by the minute – bits will probably start falling off soon!

I’ve weeded the final two beds, and the only problems hiding under the grass were:

I have two plants – they both died back, but one is showing signs of new growth. My friend, Robin, said that you’re supposed to dig up the bulbs each year, store them, and replant them the following season.

Afraid not – I planned a low maintenance garden, and am not prepared to do anything like that – I’ve got enough to do! I’ll see how they go, and perhaps replace them.

They haven’t grown at all (nor have the agapanthus). Maybe if you live in a tropical zone, you should stick to tropical plants! Having said that, the red ginger plants haven’t grown much either, so who knows?

I cut all the bushes back hard. However, I think it’s too little too late – most of them are growing sideways, and I can’t see them ever turning into the gorgeous hedge that at the moment exists solely in my imagination.

So I’ve stuck about 20 cuttings into a jar of water, and will start from scratch when they root – it will only take a couple of weeks.

This time, I’ll plant more of them, and reduce the spacing between them, so that as they grow, they can support each other.

Also, I’ll prune them regularly so that they become bushy, and turn into a low hedge instead of a tall, straggly mess. 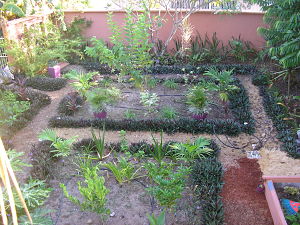 Bed running the length of the house

Side bed and passionfruit in the raised bed

The type of sawdust we get varies, depending on what wood the cabinetmakers are working with. So you end up with a patchwork effect when you first spread it as you can see from the above photos.

After a while, it fades in the sun and all looks pretty much the same colour.

The paths I’d already poisoned and covered were relatively easy to weed – it was mainly grass that had spread from the adjoining beds, so the roots were shallow and pulled out easily.

So to that extent, the sawdust mulch is working. Any grass that grows from now on will be promptly Roundup-ed or pulled out.

However, the grass in the beds is going to be a huge ongoing problem – the roots are very deep (even where I’ve previously poisoned), and it grows back very thick. It also grows back very fast. 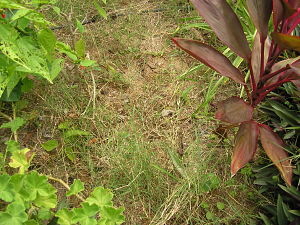 What I can expect in two months

There’s no point in just covering it all with mulch, as the grass will grow through it.

I don’t want to poison the beds as I killed some plants last time I did that – plus it takes forever as it’s too windy to spray, so I have to use a paintbrush. And it’s obviously not very effective.

I googled “weed mat” – the general consensus was that the soil underneath gets very dry, and because it’s loosely-woven, weeds/grass still grow through it. And it frays, so you get little bits of black plastic floating about the place.

Instead, I’ve decided to look for hessian (jute or burlap) fabric, and lay that on the beds before mulching.

It’ll let moisture through, and the grass and weeds will have to try pretty hard to get through both the hessian and the mulch. Any that do make it will be easily seen as the mulch is black, and I can poison them immediately. By the time the hessian rots down, the grass should all be dead.

It will probably take a while to do, as I’ll have to cut the hessian to fit around the plants. But if it works, it’ll be time well spent, and I rather do that than face a future of eternal weeding!

So much for low-maintenance!

(If you live in Mauritius and know where I can bulk-buy cheap hessian, please let me know.)

I downloaded an English gardening program called “Lovely Garden” by my all-time favourite gardener, Alan Titchmarsh, and in one episode, the garden owner had planted a tiny square of lawn in an otherwise brick-paved area. It was a bold statement and it made me laugh.

(As an aside, how is it that despite their terrible weather, the Brits are such fabulous gardeners? You can’t beat them!)

Anyway, initially, I thought that I’d buy some turf for the step by the front gates – this would be the only lawn in our garden.

However, after our problems with the grass and weeds, I’ve since changed my mind.

Instead, I cut some astroturf to shape and used that: 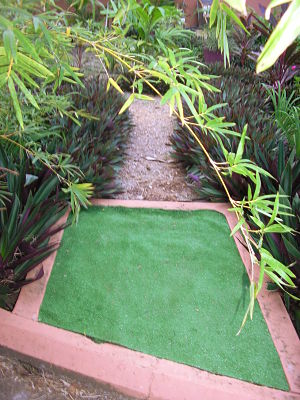 It doesn’t exactly look natural (or pretty – it’s a weird shade of green and is all sparkly in the sun – like Christmas tinsel!), but at least it’ll stop my shoes from getting muddy and the weeds from growing. Hopefully, down the track, I’ll find something better.

Well, we’re off to Perth for two weeks soon – lots of eating, shopping, and catching up with family and friends, leaving our house and Tipsy-the-cat in the capable hands of our housesitter, Amy.

Thanks, Amy, and enjoy Mauritius!

I live in Mauritius with my husband, Alf, and am planting a tropical garden. I write about people we've met, and experiences we've had as expats.

If you didn’t find the answer you were looking for, send me your question via the Comment box and I’ll answer it best I can.