As it’s winter, there’s not much happening in the garden – everything’s just doing its own thing – growing quietly and slowly.

So over the next few weeks, I’ll be turning my hand to little projects that have been awaiting my attention for way too long.

I’m starting with these… 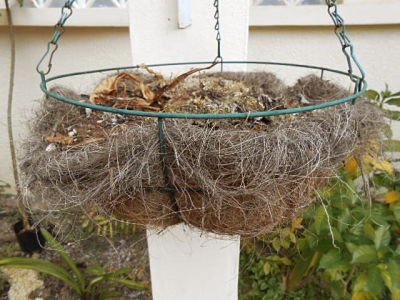 As I had about half a metre of shadecloth left over from the raised bed, and I like to recycle, I used it to line the undersides of the baskets.

I removed some of the soil to make it easier to lift the lining, inserted the shadecloth, and replaced the lining.

Once I had the shadecloth in place, I pulled it taut (the aforementioned weight stops the lining from lifting), and trimmed it, leaving a 2cm overhang.

I then turned the raw edges under, and roughly handstitched it over the rim of the basket. 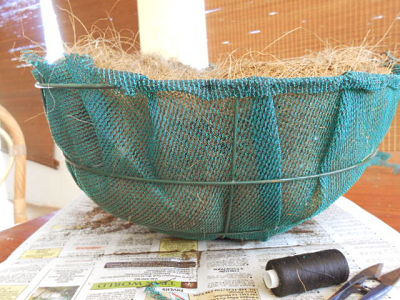 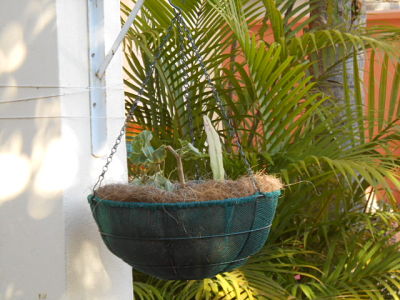 It’s not pretty, but it looks tidier, and I won’t have to keep replacing the linings.

And, being shadecloth, it might even act as an insulator, keep the soil cooler, and stop it from drying out so quickly.

Finally, if you plant something “weeping” that falls over the edges, no-one will ever notice your dodgy sewing!

I’m still looking for something that looks tropical, but “weeps” – preferably brightly-coloured, as that part of the garden looks dull because it’s in front of bland cream-coloured walls.